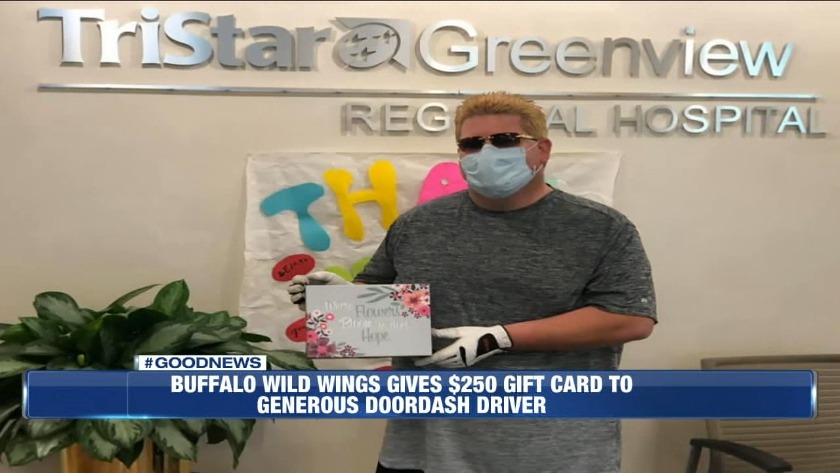 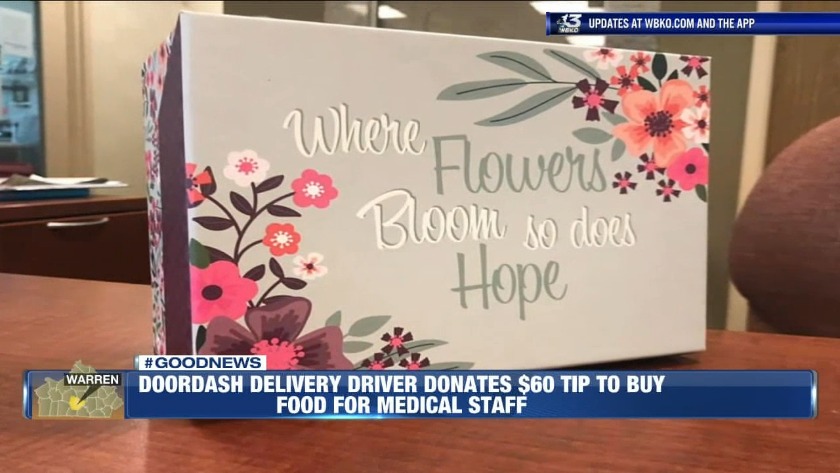 Last week we told you about the #GoodNews of DoorDash delivery driver Michael Huff.

Michael donated a $60 tip that he received while delivering food to a patient at Tri-Star Greenview Regional Hospital. After seeing our coverage of the good deed, Buffalo Wild Wings corporate office contacted 13 News about giving Michael a call.

It's a call Michael says that led to an email he thought was a mistake.

"After I got off the phone a few minutes later I ended up getting an email that came across my phone. So I opened my email up and I seen it was a gift card and I really thought it was a mistake. They sent me a $250 gift card to Buffalo Wild Wings. I literally just sat down on the bed and started crying. It was just like a warm grace feeling that came over top of me. Just happiness. That all the years that you help someone out, you don't really expect anything back," said Michael.

In a statement Buffalo Wild Wings released to 13 news they say quote,

"We love all our fans and are extremely grateful for loyal guests like Michael. He generously paid his tip forward (in the form of wings!) so we hooked him up with a wing delivery of his own. We're excited to partner with Michael in the coming weeks to continue buffalo wild wings deliveries to the hospital."

Stay tuned as 13 News continues to follow this story.

----
While making a delivery at TriStar Greenview Regional Hospital, DoorDash delivery driver Michael Huff said that a patient told him that God called upon her to give him her change box.

"She said that God told her that she wanted me to have this. And she brought out the box and she said here's your tip," said Huff. "After I opened it up, it was her change box."

Michael says after counting the money it totaled to $60, he said knew just what to do.

"Then I met some very nice people over here at Greenview hospital. Then I was thinking, well I want to do something," said Huff.

"This is where I thought that saying God wanted me to have this. And I told them I was very thankful for all the nurses and the doctors and I asked them if it was okay if I bought them lunch the next day," said Huff.

Michael decided to purchase the Greenview staff 120 wings from Buffalo Wild Wings, a gesture of appreciation for those on the front lines.

"Well I could've used this money myself but I wanted to do something for the community. This is what I thought would be a really nice thing for the doctors and the nurses here. They're the ones on the front lines, out here risking their life for this and to help everybody out here. It brought a lot of smiles and joy across their face, and it really warms my heart," said Huff.

Michael says he encourages others to help spread good news, through good deeds. Especially for our medical workers who risk it all, for your and I -- everyday.

Counties prepare for Kentucky primary, completely different than years past

Trek at the Track returns to NCM this summer

Counties prepare for Kentucky primary, completely different than years past

Trek at the Track returns to NCM this summer