Officials say strong winds are to blame for damage to a structure under construction at a gas station in Munfordville.

A wind advisory went into place for South Central Kentucky around 5 o'clock on Tuesday evening.

The wind gusts proved too much for the structure and in the daylight, officials surveyed the damage. Pieces of wood scattered and concrete blocks knocked over.

McDaniel told 13 News there were several reports of damage throughout Hart County, though the damage at the gas station proved to be the worst.

"Also, the barns and things like roofs and outbuildings and that could possibly continue into late this afternoon," said McDaniel. 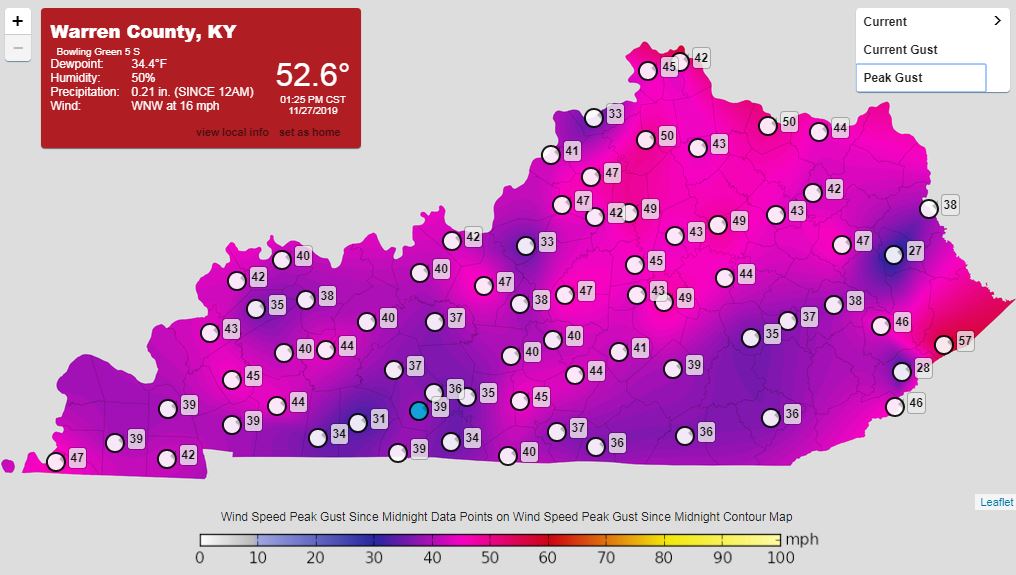 Emergency Management officials urge homeowners to take precautions by securing trash cans and outdoor decorations. They also advise drivers traveling for Thanksgiving to use extra caution on the roadways.

|
By Allison Baker
Warren County Public Schools will hold a Special-Called Meeting on August 17 at 7:00 PM in the South Warren High School Auditorium to discuss the district’s reopening plans.

|
By Allison Baker
Schools across South Central Kentucky provided the option for parents to choose virtual learning or in-person classes.

|
By Kelly Dean
President Trump’s re-election campaign spoke to 13 News on Friday regarding a number of topics including mail-in voting, debates and re-opening schools.

|
By Gene Birk
On August 14th, the Bowling Green Board of Education voted to affirm Superintendent Field’s recommendation to return to school beginning August 24th with in-person instruction through the purple and gold hybrid plan, as well as students beginning online through the BGISD Virtual Academy.

|
By Associated Press
Mayo Clinic researchers reported a strong hint that blood plasma from COVID-19 survivors helps other patients recover, but it’s not proof and some experts worry if, amid clamor for the treatment, they’ll ever get a clear answer.

|
By WBKO News Staff
The Metcalfe County Board of Education met in regular session on Thursday with the 2020-2021 school year plans on the agenda.

Unclear where data for Warren County’s positivity rate came from

|
By Kelly Dean
In Thursday’s press briefing regarding coronavirus in Kentucky, Governor Andy Beshear announced Warren County’s positivity rate was believed to be over 10%, pleading that schools in the area do not re-open.

Storm chances decrease as we head into the weekend.

|
By Associated Press
In some rural places a reliable connection can’t be had at any price.