A Warren County Regional Jail inmate diagnosed with schizophrenia has filed a lawsuit claiming he was assaulted by a Kentucky State Trooper while handcuffed.

According to the lawsuit, Timothy Heston was "actively psychotic" and walking along I-65 in Bowling Green on March 17 when he encountered Trooper Aaron Tucker. Tucker transported Heston to the Warren County Regional Jail where the lawsuit says Tucker assaulted him in the sally port.

The lawsuit names two WCRJ employees as defendants, stating Heston was restrained and tased, once by Captain Melissa Causey and at a different time by Deputy Andrew Cooper. 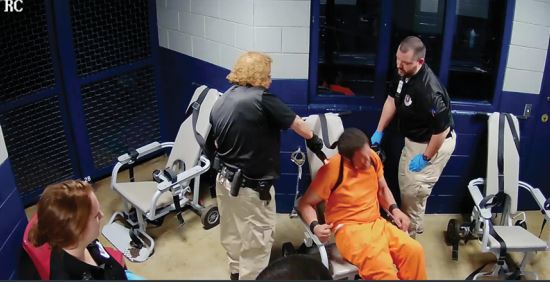 Warren County was also named as a defendant as being responsible for the policies, practices and customs of the WCRJ.

Jailer Stephen Harmon released a statement Friday saying that the allegations involving the WCRJ are separate from the allegations involving Trooper Aaron Tucker. He said the information being distributed by media outlets is not a complete and accurate picture of what occurred within the WCRJ and that once all evidence comes to light they are confident Warren County will prevail and that all claims will be dismissed.

|
By Kelly Dean
Two crimes over the course of two days caught on a local business’ Ring camera are now being investigated by the sheriff’s office.

Man charged with conspiring to hide kids’ bodies in his yard

|
By REBECCA BOONE
Prosecutors accused a man of conspiring with his new wife to keep the bodies of her children hidden on his rural Idaho property.

Bowling Green nurse fighting for her life after contracting COVID-19

|
By Allison Baker
Molly Dawson is a 25-year-old nurse in Bowling Green and just 15 days ago her life flipped upside down when she was hospitalized for COVID-19.

|
By WBKO News Staff
The Warren County Courthouse will be reopening to public access on Monday, July 6 from 8:00 a.m. until 4:30 p.m. Monday through Friday.

|
By Gene Birk
The Bowling Green Police Department is investigating a homicide that took place between November 8th and November 10th, 2012.

|
By Kaley Skaggs
According to Houston these veteran’s photos that are hanging up in the Edmonson County courthouse date back to the war of 1812 and the photos are extremely unique.