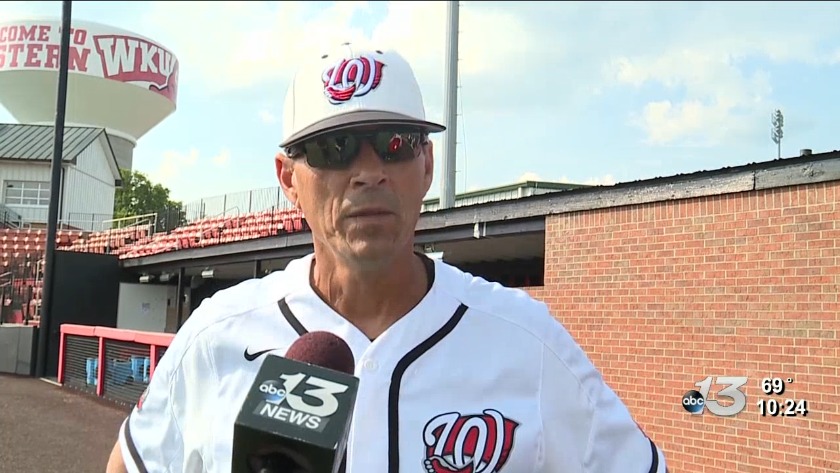 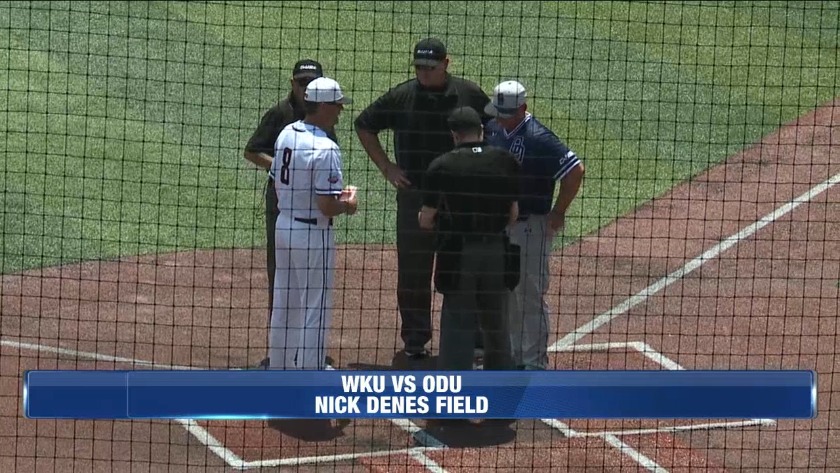 Bowling Green, Ky. (WBKO) --- What looked to be a sensational WKU Baseball come-from-behind victory turned into a stunning loss for the Hilltoppers on Saturday afternoon. Trailing 10-5 with two outs in the top of the ninth, visiting Old Dominion scored seven straight runs and defeated WKU by a score of 12-10 in the 2019 regular-season finale.

With the loss, the Hilltoppers enter postseason play with a 25-27-1 overall record and finished with a 16-13-1 mark in league play. WKU will be the No. 4 seed in the 2019 Conference USA Tournament in Biloxi, Miss., and face the No. 5 Monarchs for a first-round rematch on Wednesday, May 22. The game will be the fourth played at MGM Park on the day, with an estimated start time of 7:30 p.m. On Thursday, the winner will play the winner of the No. 1 Florida Atlantic vs. No. 8 UTSA matchup, with the loser playing the loser.

Entering the bottom of the seventh trailing 5-3, WKU was able to tie the game on the heels of 3.2 scoreless innings by freshman reliever Hunter Crosby. Second baseman Nick Brunson scored on a passed ball and designated hitter Richard Constantine drove in catcher Collin Hopkins on an RBI single.

In the next frame, the Hilltoppers exploded for five runs on five straight hits with one out. Third baseman Sam McElreath lined WKU's 100th double of the season into the right-field corner, Brunson followed with a single to right field after a nine-pitch at-bat, then Hopkins grounded a single off the glove of the diving third baseman. First baseman Jack Wilson followed with an RBI double to right-center field to score Hopkins and give the hosts an 8-5 lead while knocking Old Dominion reliever Hunter Gregory out of the game.

Righty Aaron Holiday was called upon out of the bullpen, and left fielder Ray Zuberer III greeted him with his fifth homerun of the season on the second pitch, a two-run long ball to right field that extended WKU's advantage to 10-5.

Reliever Jacob Green was called upon to begin the top of the ninth for the Hilltoppers. The righty retired two of the first three Monarchs he faced and got to an 0-2 count on Matt Burch before the second baseman singled up the middle to extend the game. Three batters later, designated hitter Will Morgan homered under the right-field scoreboard to knot the game at 10-10 and Green's day was done.

In came righty Collin Lollar from the bullpen, who allowed a ground-ball single and four-pitch walk to begin his outing. Then, what seemingly looked like an inning-ending chopper to shortstop Kevin Lambert turned into a miscommunication with Brunson at the second base bag, allowing all runners to be safe while the go-ahead Monarch hustled in to score from second base. Old Dominion added an insurance tally a batter later, when pinch hitter John Wilson singled to right field for a 12-10 lead.

After getting the final two outs of the bottom of the eighth following Zuberer's homerun, Holiday retired the Hilltoppers 1-2-3 in the ninth to close out the game.

Topper Notes
Although he went 0-for-3, right fielder Jake Sanford was intentionally walked two times for the second time this year, extending his on-base streak to 38 consecutive games. Leading the league with a .403 batting average, 22 homeruns and 65 runs batted in, the Dartmouth, Nova Scotia, native concluded the 2019 regular season as the only Triple Crown winner in C-USA history.
WKU suffered only its second loss of the season when leading after the eighth inning, falling to 19-2-1 in such games. The other defeat was at No. 5 Vanderbilt on April 2, when the Hilltoppers were leading 4-2 heading into the bottom of the ninth before allowing solo homeruns to Austin Martin and J.J. Bleday to tie the game and eventually falling 5-4 in the 10th. On the flip side, WKU is 3-21 when trailing after eight innings.
The Hilltoppers fell to 1-13-1 when allowing 10 or more runs, 16-17-1 in day games, 5-6 on Saturday's, 5-5 in the month of May, 6-7 when wearing white jerseys, 5-3-1 when wearing white caps and 6-22-1 when being out-hit.

Topper Quotes
"I felt very good about what we had done, winning yesterday and then today fighting back to put ourselves in a good position being up by five runs and got two outs in the ninth inning. Then they put together some quality at-bats and the next thing you know, we're down a couple of runs and that's how quickly the game changed, and give Old Dominion credit." Head coach John Pawlowski.
"It leaves a sour taste in our mouths in the last game of the regular season at home, we'll have to flush this out and get ourselves ready to go down and win a tournament ... Our guys know how tough that last out to get is, they understand it. They'll take this experience and have a little more incentive going into the tournament. But this has been a very resilient group all year." Head coach John Pawlowski.
"It's sickening how it ended, but we're feeling really confident about next week in Biloxi. We know that today's just one more game and the games that really matter start Wednesday, so that's what we're looking forward to ... It's a new season, whatever happened last pitch, last game doesn't matter." — Junior Richard Constantine.
"We all believe in each other. This group is like the best group of guys I've ever played with, I love every one of them, and we have each other's backs. I know some of our players didn't perform the way they wanted to in certain situations, but we still believe in them the next time they toe the rubber or step up in the box." — Junior Richard Constantine.